For those with distinguished tastes, the Narragansett is the perfect pool table.  It is simple, yet elegant and won the Gold Medal at the Paris Exposition!  Correct proportions, beautiful wood that displays the details so elegantly, and adherence to Brunswick-Balke-Collender’s high standards of construction all assure timeless adoration of the Narragansett.

A standard design which secured gold medal award at the Paris Exposition. Simple, but a perfect model.

Manufactured under 18 construction patents awarded from 1892 to 1905.

Furnished only in Quarter Sawed Golden Oak, in billiard, pool or combination. The construction is strictly first quality. The legs are secured to the framework with wooden dowels, reinforced with long iron bolts passing through the entire length of the leg to the top of the head-block, thus obtaining positive solidity.

The slate bed is best quality Vermont one inch thick, the sections being joined with brass dowels and sockets, entirely eliminating screw holes in the slate bed--the method used in tables by other manufacture.

The cushions are the celebrated quick acting Monarch, guaranteed the most perfect angle cushion in the world. Used by all professional players in America and Europe.

The cushion rails are of extra heavy construction and firmly bolted to the slate bed. The cushion rail tops are veneered with rosewood, which does not change color, cannot be easily disfigured and does not have the objectionable features of a polished surface.

This design will never become commonplace. Its lasting popularity is in its simplicity and perfect proportions. It has been said that the fraction of an inch either way in the length or Cleopatra's nose would have changed the destiny of empires. Correct proportion is the first essential in all things pleasing to the eye regardless of whether it be a woman's face or an article of furniture. As in speech, all rules must give way to euphony, so it is that correct proportion holds the place supreme in all shapes that the eye favors. This rule obtains to a marked degree in the Narragansett billiard table. We attribute to the fact that our steadfastly adhering to the exact lines of the original model the favor which this table has held for many years.

Extensively used in some of the finest clubs, hotels and billiard halls in the United States.

In this era of severe and critical taste in house decoration, many turn from the very ornamental to the plainer styles of furniture. To meet this demand we have produced the Narragansett. The table finds great favor with people whose ideas of correct taste are considered standard. It was the design of table manufactured by us that received the award of first medal for excellence at the Paris Exposition, when in competition with like goods from all parts of the world. While nothing of a florid character has been attempted in this design, still the table is one which has an inherent beauty peculiar to its own individuality. The clear polished woodwork of the sides and the head and foot of the table is tastefully relieved by vertical moldings at each head block.

The legs, besides being jointed with wooden dowels, are fastened with along iron bolt passing through the entire length of the leg to the top of the head block, thus insuring positive solidity. All tables are fitted with Vermont slate beds from our own quarries, imported Simonis cloth and the incomparable patent Monarch cushions. 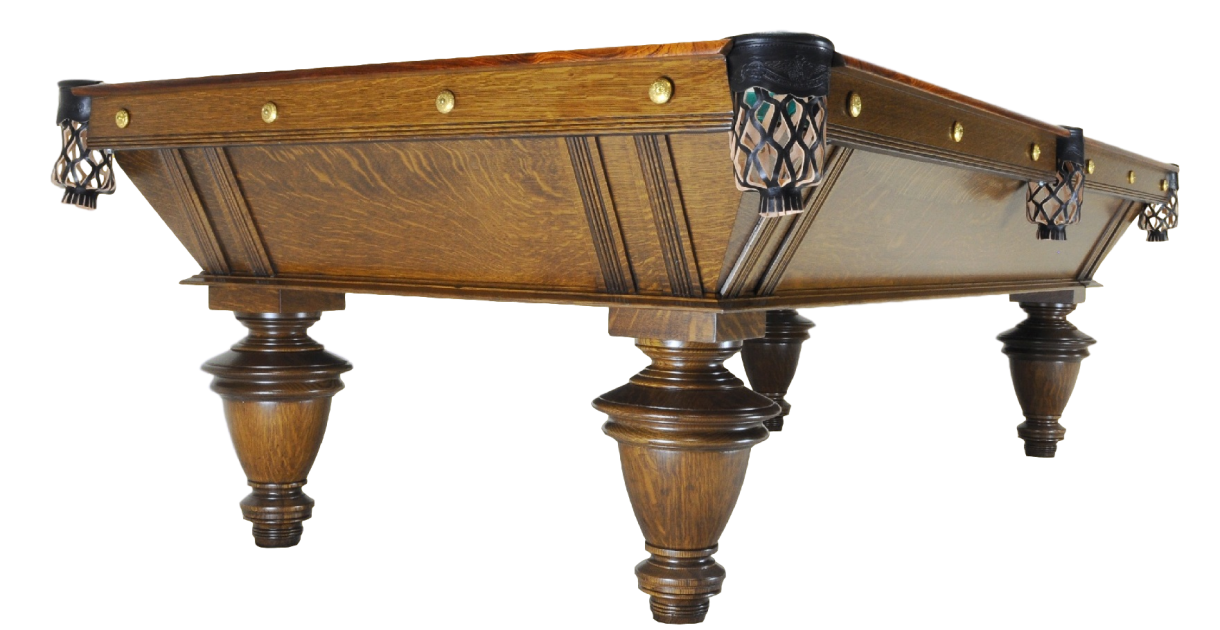