High Victorian style was popular during the later part of the 19th century. This architectural style appeared in buildings, artwork, and pool tables.  The design was characterized by an eclectic assortment of patterns, textures, and colors, and even some Gothic elements.

While the J.M. Brunswick & Balke Company was designing their ‘Novelty’ series of pool tables, Brunswick & Company (whose history includes John Brunswick’s half-brother, Emanuel) designed and created the Starburst during the years 1877-1882.   This design clearly fits into the ‘Novelty’ series whose notable feature includes having the legs of the table turned at a 45* angle to the cabinet.  This draws the discriminating viewer’s eyes to the cabinet where the corners are scooped out, creating a pointed arch – a classic Gothic design element.

The Starburst is an extraordinary table; Black Walnut or Mahogany was chosen for the cabinet because of its strength and unique grain.  Exquisite inlays of mahogany, maple and walnut create a beautiful work of art. Brazilian Rosewood was the preferred wood for the rail tops, accented with Ivory sights.

Not many Starburst tables were manufactured by Brunswick & Company.

This is a rare gem. 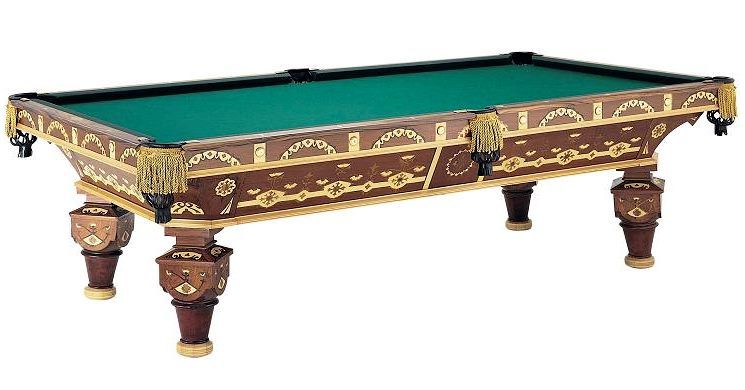